Andrew Paynter is a well-known musician in the Summerside area. A multi-talented performer, he has performed with groups such as Neon Moon, Neon Country, and is part of the kitchen party band for the Summerside legion, just to name a few.

Cathy Jackman, from the western part of PEI, has been doing shows at Spinnakers’ for the past few years performing with the group Side By Each. Most famous for her song “I’ve Been Everywhere PEI Style”, which has been featured on the Eric McEwen show. She has two CDs to her credit, a solo CD called “Follow Your Dreams” and a duet CD with Jeff Coughlin called “Songs for the Road.”

Come on down to the waterfront and join us at Spinnakers’ Landing for some FREE live music! 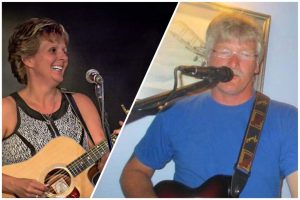