Concerts in the Garden: DUSTY ROADS

Concerts in the Garden of Wyatt Heritage Properties are returning for the twenty-second summer to the outdoor stage of Wyatt Heritage Properties. The concerts, held on Wednesday evenings during July and August, feature local musicians and bands performing a range of music. The concerts run from 6:30 pm to 8:30 pm. Admission is by donation. People are asked to bring their own lawn chair for seating.

During intermission, Wyatt Heritage Properties homemade ice cream, made with Island dairy products from ADL, is available for purchase. Topping for the generous helping of ice cream is Island strawberries or rhubarb.

Concerts in the Garden is a relaxing summer evening of Island entertainment on the beautiful grounds of the historic Wyatt Heritage Properties.

DUSTY ROADS had its beginning as the House Band at the Noye Family owned Sun-n-Shade campground in Borden-Carleton. They played shows for large local audiences and campers from around the world. At the open mic segments of shows, they backed up many great entertainers including Grand Old Opry star, George Hamilton IV. They have performed both off-Island and across the Island with many well-known musicians. Harold has released an album titled “Dusty Roads”. 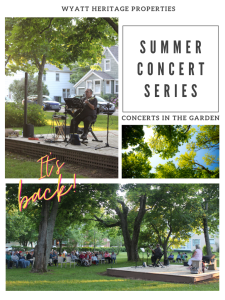