Rhonda Vincent is a firecracker of talent that powers one of the hottest bands in any genre of music today. The Rage is comprised of Mickey Harris on upright bass, Hunter Berry on fiddle, Aaron McDaris on banjo, Jeff Partin on dobro and Zack Arnold on guitar.

She began her professional music career singing in her family’s band, The Sally Mountain Show. She began singing at age five, picked up the mandolin at eight, and the fiddle at twelve. After performing with her family in Silver Dollar City in Branson, Missouri, they received a call from Hal Durham, general manager of the Grand Ole Opry at the time. He loved what he heard and invited the Vincent family to appear on the Opry.

Rhonda’s life of music evolved into a successful career in bluegrass music after being discovered by Grand Ole Opry star Jim Ed Brown. A multi-award winner, she received a 2017 Grammy for Best Bluegrass Album, Entertainer of the Year 2001, Song of the Year 2004, an unprecedented seven consecutive Female Vocalist of the Year awards from the International Bluegrass Music Association 2000 – 2006 and an 8th win of IBMA Female Vocalist of the Year in 2015. Crowned the ‘New Queen of Bluegrass’ by the Wall Street Journal in 2001, her lifelong dream came true when she became a member of the Grand Ole Opry on February 6, 2021. 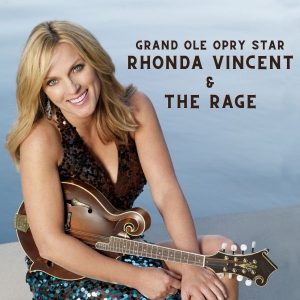