The Ellis Family from Summerside, Prince Edward Island (PEI) grew up surrounded by music. As kids the four brothers were exposed to all kinds of music. Traditional “Island” fiddle music was introduced to the boys by the band founder and father Russell Ellis, a well-known fiddle player. That style of music mixed with popular music from the 1970’s helped mold a unique musical sound that can still be heard today in EFB’s live performances. The Ellis Family Band was established in the mid 1970’s when the two older brothers, Brian and Rick Ellis were teenagers. Russell (dad) saw great potential in base player Greg MacDonald’s musical talents early in the bands development and Greg has been an EFB member and “fifth brother” ever since. Steve and Dave Ellis joined EFB in the early 80’s and the
band quickly began to make national waves. They released their first Nashville recorded original song Easy To Love, written by Rick and mom Ethel and the song made the national music charts. This immediate success offered EFB the opportunity to make music their profession and for the next few years they toured across Canada.

In a five-year span during the mid to late 1980’s things moved quickly for EFB. They were CCMA (Canadian Country Music Awards) nominees five years running for Canadian Group of the Year. They also garnered a Juno nomination as Country Group of the Year. EFB released over 15 singles off their three Nashville recorded albums and each single made the top 50 national charts. In 1988 they achieved a career highlight by charting a #1 song, Thank You For Being My Friend, penned by bassist Greg MacDonald. This success resulted in EFB being offered an international recording contract with CBS Records, Nashville.

Deep family roots and the necessity to move away from PEI caused the band to re-evaluate their musical goals. The band members unanimously agreed to decline the record deal and return to their roots on PEI. After taking a break from performing in the 90’s it became evident that EFB still had music
in their veins and with a little persuasion they re-established with some new goals and fresh ideas. Since 2005 EFB have played to sold out concerts and dances across Prince Edward Island. This “second career” provided the band with opportunities to share the stage with such music legends as Reba MacIntyre,

The Beach Boys, Paul Brandt, Dirks Bentley, Trooper, April Wine and many more. The band performs a select few dates per year for special events. If you have an opportunity to catch EFB perform at a special event take it in, five part “blood” harmonies and years of professional touring is evident in every song.

At DWD live show you will hear a mixed variety of genres, aimed to appeal to a wide audience. You will hear current country hits, classic rock, a splash of punk/alternative and originals.

DWD biggest musical influence is none other than the men they call dad and uncle “The Ellis Family Band”.

The name “DOWN WITH DARBY” originates from the significance of a small street in hometown Summerside. Here, members attended Greenfield Elementary School. They attended their first music classes. Brothers Chris and Jason played their first ever live performance at a school variety show, singing CCR hit “bad moon rising”. Lastly, Chris and Jason were born and raised on Darby Drive.

Darby Drive was the site of street hockey games, games of “jailbreak”, capture the flag, and so much more. To make a long story short, it all happened and it all started on Darby Drive. 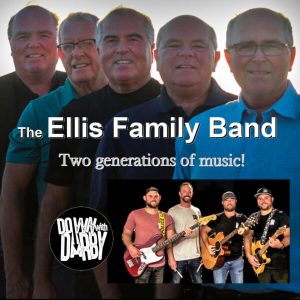